It is interesting to see how Egypt struggles to gain human rights for their youth, but then you have intersectionality playing a role when it includes between men and women. Women, just like men go out on the ground to protest and spread information on the media. The media uses this trait as a way to either twist the story to seem more appealing or catch the attention of the viewers. Sexual harassment is a common obstacle that the young women face while protesting, but also receive the physical beatings that the men receive. International media is able to mold the concepts that common viewers have of Egyptians and their “intentions” given the attack of a journalist, especially the blonde woman. They don`t focus on the fact that it could have been state officials sent to create a bad public image for those fighting for their human rights. Although there is all this effort for promotion and advocacy of these movements, the outside sources will affect the support gained towards their causes.  Women have to fight not only for the general human rights wanted by the youth but to be heard as individuals and not treated differently based on their gender. 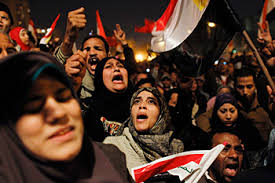 One thought on “Women in the Battle”