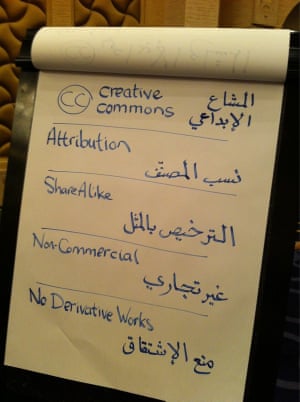 As Jessica Dheere states, there is no reason why having more bloggers involved in stories means they are going to get further and more population will actually listen. But what the digital media really does is spread the word quickly and effectively. We have all lived it in a certain way or format. People have posted comments or photos that have gone viral and reached unexpected distances all around the World. This is what’s happening with the digital activism in the Arab countries. They reclaim for free speech and during this they get sent to prison or vastly punished for it, however they don’t give up and the word spread all around the World to the point that we have become conscious of what’s happening.

The most shocking part is that the government tries to stop it by blocking social networks like Facebook in Tunisia, or the vast censorship that is happening around these countries. However the population is so keen on finding a solution that they find various tactics to pass these limitations and reach far as they are doing right now.

I completely agree with Jessica’s article as the main right that everyone should have no matter what their occupation is should be the right to speak freely about whatever you want, giving opinions. There shouldn’t be a specific way to write or specific topics to comment on, the idea of being a blogger is to be able to express your thoughts and feeling to the whole World.

I don’t think being a journalist is something negative; however I just see them as two different jobs. Many people criticize the bloggers as they think that they are taking over the journalism, however in my opinion this is completely a wrong idea as it is two very different ways to see reality. Journalism is meant to be done in an objective way so the reader can be presented with the issue and the solution to that issue. On the other hand, the bloggers just give opinions which are also helpful for the reader but it is only from one point of view.